Most Americans (62%) worry that the political pressure from the Trump administration will lead the Food and Drug Administration to rush to approve a coronavirus vaccine without making sure that it is safe and effective, the latest KFF Health Tracking Poll finds. This includes majorities of Democrats (85%) and independents (61%), as well as a third of Republicans (35%).

In addition, about four in ten say that the FDA (39%) and the CDC (42%) are paying “too much attention” to politics when it comes to reviewing and approving treatments for coronavirus or issuing guidelines and recommendations.

The poll comes as President Trump and others working in his administration and for his reelection campaign have suggested a vaccine could be ready in the coming months. The Centers for Disease Control and Prevention recently asked states to be ready to distribute a vaccine by November 1, just two days before the 2020 elections.

Most Americans (81%) – including majorities of Democrats, independents, and Republicans– say they do not believe a vaccine will be widely available before the presidential election.

“Public skepticism about the FDA and the process of approving a vaccine is eroding public confidence even before a vaccine gets to the starting gate,” KFF President and CEO Drew Altman said. 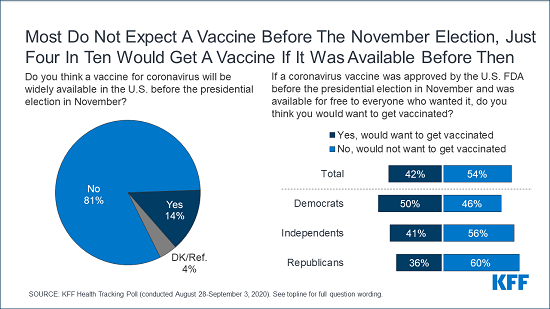 The poll also captures a drop in the public’s trust of the nation’s public health institutions and officials to provide reliable information about coronavirus, particularly among Republicans.

Overall, about two in three adults say they have at least a “fair amount” of trust in Dr. Anthony Fauci (68%), the director of the National Institute of Allergy and Infectious Diseases, and in the CDC (67%). About half (53%) say they trust Dr. Deborah Birx, the Coronavirus Response Coordinator for the White House Coronavirus Task Force. Half say they trust Democratic presidential nominee Joe Biden (52%), while four in ten say the same about President Trump (40%).

The share of adults who say they trust the CDC has fallen by 16 percentage points since April, with the biggest dip occurring among Republicans (60% now, down from 90% in April).

The share who say they trust Dr. Anthony Fauci has declined by 10 percentage points since April overall, driven by a 29 percentage points drop off among Republicans (48% now, down from 77% in April), as President Trump publicly disagreed with some of his public health advice. In contrast, Dr. Birx retains a high level of trust among Republicans (70%), but lower levels of trust among Democrats (44%).

“Politicizing basic facts like whether a mask can prevent coronavirus’ spread creates an environment where misinformation is easily shared and believed,” said Mollyann Brodie, executive director of KFF’s public opinion and survey research.

Six months into the pandemic, the public’s views about it are shifting in a more optimistic direction:

Two months before Election Day the poll shows a sharp partisan divide in the issues that matter for the election.

The economy is overwhelmingly the top issue for Republican voters with more than half (53%) choosing it as the most important issue, with criminal justice and policing second (23%). The economy is also the top issue for independent voters (29%), followed by criminal justice and policing (20%) and the coronavirus outbreak (19%).

In contrast, a third of Democratic voters (36%) say the coronavirus outbreak is their top issue, followed by race relations (27%). Outside of coronavirus, health care and the economy tie for third on Democrats’ list (14% each). 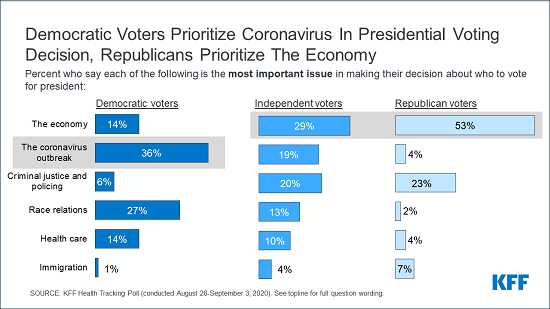 “Democrats and Republicans are having two different elections. For Democrats, it’s about Covid and race. For Republicans it’s the economy and violence,” Altman said. “And health care has slipped down the issue list for everyone.”

Across all voters, the economy is the top issue (32%), followed by coronavirus (20%), criminal justice and policing (16%), and race relations (14%). Health care had been a top issue during the primary season but outside of coronavirus, health care now ranks fifth (10%).

The shift in voters’ mix of issues likely reflects recent events, including police shootings of unarmed Black Americans and subsequent protests and counter-protests, some of which resulted in violence and have been a recent major theme of President Trump’s reelection campaign.

Designed and analyzed by public opinion researchers at KFF, the poll was conducted from Aug. 28 to Sept. 3 among a nationally representative random digit dial telephone sample of 1,199 adults. Interviews were conducted in English and Spanish by landline (295) and cell phone (904). The margin of sampling error is plus or minus 3 percentage points for the full sample. For results based on subgroups, the margin of sampling error may be higher.