Smaller businesses seem to be getting the message that cyber risk isn’t just something for big companies to worry about; nevertheless, many still balk at buying cyber insurance, according to a new survey from the Insurance Information Institute (I.I.I.) and J.D. Power.

The 2019 Small-Business Cyber Insurance and Security Spotlight found that 12 percent of survey respondents experienced at least one cyber incident in the past year, up from 10 percent in 2018.  Nearly 71 percent said they are “very concerned” about cyber incidents, up from 59 percent, and 75% said they believe the risk of being attacked is growing at an alarming rate, up from 70 percent last year.

Two of the top four reasons cited for not buying cyber coverage are within insurers’ control.

Why are many smaller firms so reluctant to insure against a threat they recognize to be real and growing?

The top two reasons given were: cost (42 percent) and the belief that the companies’ risk profiles don’t warrant coverage (35 percent). Twenty-seven percent said they believe they handle cyber risk sufficiently well internally, and 17 percent cited “too many exclusions” as a reason for not buying coverage. For the non-insurers in the audience, “exclusions” are provisions in an insurance agreement that limit the scope of coverage. 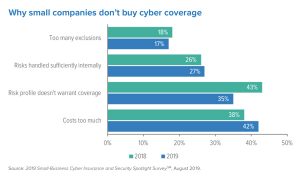 So, in other words, two of the top four reasons cited by insureds for not buying cyber coverage – cost and exclusions – are within insurers’ control.

“Given small companies’ growing awareness and concerns about cyberrisk, insurers and agents and brokers might be able to increase their overall support of this market by addressing the issues of affordability and coverage limitations that seem to be an obstacle to purchasing.”

Closely related to cost is the question of value. What do insureds get for their premium dollar?

“We’re seeing more insurers work with commercial customers to mitigate risks – in particular, with small and mid-size businesses,” said Sean Kevelighan, I.I.I. president and CEO. “We know many of the large cyber incidents can be sourced back to a smaller business or vendor, and, thus, it’s increasingly critical to assist in loss prevention measures that can make the customer more resilient, while also reducing claims and damages.”

It’s hard to say based on the data, but perhaps such insurer involvement plays as significant a role in small companies’ increased adoption of cyber insurance as does their growing anxiety about cyber perils. As companies increasingly see cyber insurers as trusted risk-management partners – not just writers of policies and payers of claims – perhaps take up rates will accelerate.